Places I’ve jammed with other folks, written or recorded. It’s a great way to get a sense of who I am and what I’m on about. 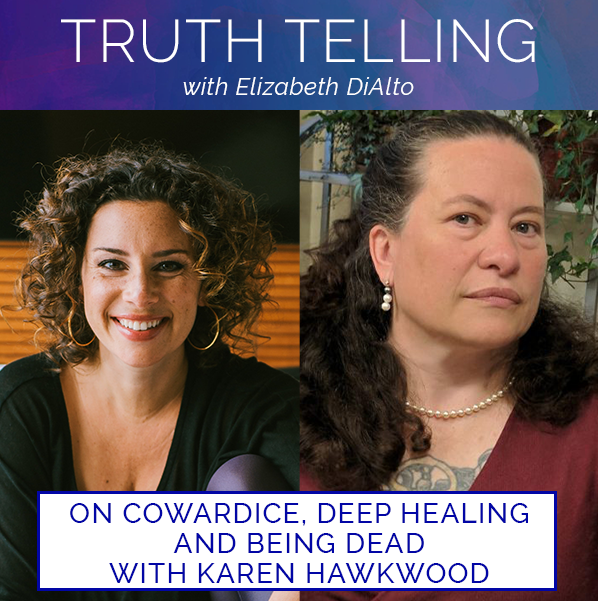 The absolutely inimitable Elizabeth P DiAlto chose to interview me for her podcast and I was completely stoked, mostly because Elizabeth is, as they say, the BOMB-DIGGITY.

She’s a truth-teller of the highest order. She’s passionately alive in a way that I find very few people ever achieve. She’s seen and done and moved past things in her short-ish time on this Earth that take my breath away, and she’s been sharing that earned wisdom with the world for several years now.

I’ve dug her since we first came into contact, and lately her work has taken a MAJOR sort of “downshift” – that feeling when you’re coming up to some gnarly curves and you need more torque, so you drop it down a gear and feel your butt get pushed back into the seat as the engine roars like a lion calling.

Her first question is always, what’s a big truth that’s really up for you right now?

My unfiltered answer: People are cowards. (Including me.)

Then I said: the politer way to say it is that most people are not in integrity most of the time.

Her response: LET’S TALK ABOUT THAT COWARD BIT! THAT’S JUICY!

This is just one example of why I love and respect this woman so much.

It’s long enough to be interesting, not so long as to get boring, and if you dig me, you will FUCKING DIG Elizabeth. We had an amazing time in this convo, so check it out!